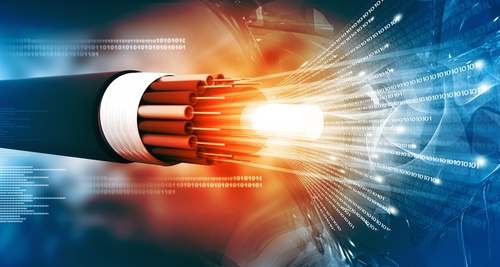 As technology continues to change and evolve, the ways we use technology also changes. The internet is among the most rapidly changing of the technology that we use every day. If you don’t stay on top of the best practices for accessing internet, you will quickly be left behind. Internet that operates too slowly ultimately means business that operates to slowly. Depending on the way your business’ internet is set up, the speed can vary greatly. Let’s talk about what is widely considered to be the future of broadband, fiber optic internet.

What Is Fiber Optic Internet?

The core is typically made of glass and is the location through which light passes. The cladding is often made from a thicker layer of glass or plastic, in some cases, which wraps around the core. Together, these two pieces allow for something called total, internal reflection. This is how light moves down the fibers without escaping. The optical density of the glass in the core and the cladding controls how quickly light moves.

In order to make fiber optic internet work, light is transmitted down the fiber in pulses that carry binary data. This system of ones and zeros are converted into light pulses which send messages in eight-part patterns. Once these message reach their destination, an optical network terminal converts the light into electrical Ethernet. When this light converts to Ethernet, you can connect your devices to the internet.

Cable internet is faster than DSL, but only about a tenth the speed of fiber optic internet. The way cable internet works, the ISP meets the local coaxial network at a shared central node. This node could be shared between 100 to upwards of 2,000 homes. This shared model means lower speeds during peak usage times.

As you might expect, wireless internet does not use wires. A tower transmits radio waves across frequencies when the antenna is within the line of site of the wireless tower. While wireless internet can compete with the speeds of fiber optic internet, the connection can be seriously degraded due to a number of different circumstances that are out of the consumers control.

Why Businesses Are Opting For Fiber Optic Internet

There are a great number of benefits for businesses to take advantage of when it comes to fiber optic internet. The most common reason business owners are opting for fiber optic is the speed. In a recent study, Sandisk noted that slow internet connections cost employees about a week per year of productivity. With fiber optic internet, you have speed options that range from 5 Mbps to 100 Gbps and is not affected by high usage.

Additionally, fiber optic internet offers business owners variety when it comes to data transmission and storage. With secure cloud access and large bandwidth, your dollar goes significantly further as far as capabilities are concerned. It’s more than just the ability to store and transmit data with fiber optic internet, though. You see heightened security that prevents both human and machine threats from interfering with your network.

If you are considering fiber optic internet, contact the experts at High Country Workplace Technologies today to learn more about how fiber optic can save your business time, energy, and money.

Published in Phone & Internet
Tagged under